Food for thought, from a study on US companies'  accounting practices cited by Gretchen Morgenson in the New York Times:


"Among 380 companies that were in existence both last year and in 2009, the study showed, non-GAAP net income was up 6.6 percent in 2015 compared with the previous year. Under generally accepted accounting principles, net income at the same 380 companies in 2015 actually declined almost 11 percent from 2014."

The peso's been on a steep uphill climb for the last year and an half... 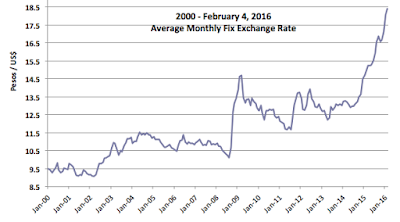 The graph below (from the Institute of International Finance, via the New York Times) illustrates why one shouldn't be surprised by the weakening of the peso, underway since the summer of 2014. 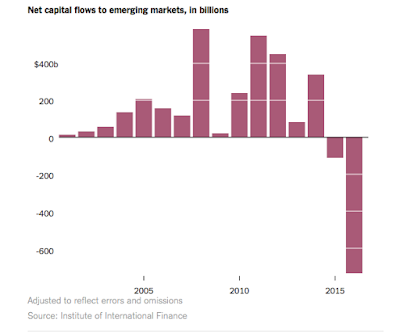 Class in the US... the fifth conclusion

5Over the years, certain demographic groups have fared better than others in moving up the economic ladder. Since 1971, older Americans (ages 65 and older) and African Americans have made notable progress in moving up the income tiers. But overall, both groups are still overrepresented in the lower-income tier. Married adults also made significant progress over this 44-year period, and women overall made greater economic gains than men.
Americans without a college degree stand out as experiencing a substantial loss in economic status since 1971, as do young adults ages 18 to 29. Hispanics overall are also more likely to be in lower-income households than in 1971, a change driven by the increasing share of immigrants in the Hispanic population in the past four decades.

Class in the US... the fourth conclusion

4The share of U.S. aggregate household income held by middle-income households has plunged, from 62% in 1970 to 43% in 2014. Meanwhile, the share held by upper-income households increased from 29% to 49%. This shift is driven both by the growing size of the upper-income tier and more rapid gains in income at the top.
There is also a growing disparity in the median wealth (assets minus debts) of these income tiers. Upper-income families, who had three times as much wealth as middle-income families in 1983, more than doubled the wealth gap to seven times as much in 2013.
http://www.pewresearch.org/fact-tank/2015/12/10/5-takeaways-about-the-american-middle-class/
Publicado por Deborah Riner en 8:19 No hay comentarios:

Class in the US... the third conclusion

However, the nation’s economic progress over the past several decades masks financial setbacks since 2000. Because of the recession in 2001 and the Great Recession of 2007-09, overall household incomes fell from 2000 to 2014. The greatest loss was felt by lower-income households, whose median income fell 9% over this period; the median for middle-income households fell 4%, and that for upper-income households fell 3%.
http://www.pewresearch.org/fact-tank/2015/12/10/5-takeaways-about-the-american-middle-class/
Publicado por Deborah Riner en 8:18 No hay comentarios:

Class in the US... the second conclusion

2The decline in the middle represents both economic progress and polarization. The shift shows progress in the sense that a larger share of Americans now live in upper-income households. Fully 21% of American adults in 2015 were upper income, compared with 14% in 1971, a 7-percentage-point increase. The increase in the share of upper-income adults was greater than the change in the opposite direction. Some 29% of U.S. adults were low income in 2015, compared with 25% in 1971.
But the data also show increasing economic polarization: As the distribution of adults thins in the middle, it is bulking up most at the extreme ends of the income distribution, the lowest and highest tiers.
http://www.pewresearch.org/fact-tank/2015/12/10/5-takeaways-about-the-american-middle-class/
Publicado por Deborah Riner en 8:17 No hay comentarios: